Today I have a guest post from Stefan Ahnhem, author of Victim Without a Face which was published by Head of Zeus on 7 January 2016. Here Stefan talks about screenwriters who are turning to novel writing.

Since Maj Sjöwall and her husband Per Wahlöö had their big breakthrough with their books about homicide investigator Martin Beck in the beginning of the seventies, the fictitious homicide departments in Sweden have been busy with solving cases and hunting down serial killers. Ten years ago, people said the Swedish crime fiction wave had reached its peak, and there was only two ways it could go: down, or deeply down. Then Stieg Larsson’s Millennium Trilogy was released and the rest is history.

And now, like a redeemed choir, those same voices are singing yet again about the downfall of Nordic Noir. The question is: are they right this time? Will the impressive global sales figures that we see today be nothing but a faint memory in a couple of years? Well, I don’t think so. Why? Because the screenwriters are on the horizon, ready to take over the baton and hit the ground running.

Let’s have a quick (and unscientific) look at the Swedish crime fiction scene has gone through during the last twenty years.

First there were the authors. Some of them had already written several novels before they started to write crime stories. Others debuted in the world of suspense and then went on to writing fiction outside the genre. What they had in common was the skill to create complex and interesting characters and, just as importantly, they knew how to tell a good story.

Then came the experts. Former police officers and homicide investigators started writing crime fiction. Lawyers, psychiatrists and journalists followed. Even our former Minister of Justice is now a full time crime writer. They are all experts in a specific field – they know exactly how two police officers talk during a coffee break, or how tough the deadlines can be on a daily newspaper. But do they also know about telling a good story and creating three-dimensional characters? Yes, some of them obviously know a lot and are indeed very talented. Others … Well, let’s just say that not everyone has the gift.

Then a new trend started a couple of years ago as screenwriters made the shift from screenplays to prose. Some are now switching between the two. Others, like myself, have completely left the film industry. This is (hopefully!) good news for all the publishers, agents, and – most of all – you readers. Screenwriters don’t know anything about forensic analysis, medical terms and so on (which is why we do lots of research). What we do know, however, is how to tell a good story. A story with twist and turns that are hopefully unpredictable but still logical nonetheless. A story that grabs hold of you from the first and pages and that you won’t be able to put down before you have reached the end.

So the next time you’re standing at the crime table in your local book shop and can’t decide what to buy, choose a book by a former screenwriter. I promise you will know the difference. 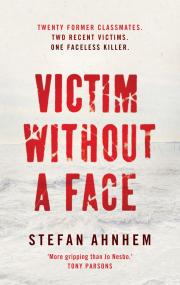 “A KILLER WITH A MESSAGE The first victim was a bully who liked using his fists. The second was a thug who favoured steel-capped boots. Their bodies bore the marks of a killer who knew their sins. A single clue was left at the scene: a class photo from 1982, with two faces neatly crossed out. A DETECTIVE WHO CAN’T LET GO There are eighteen men and women in the photo who are still alive – and one of them is the lead detective on the case. Fabian Risk thought he’d left his schooldays behind. Now his classmates are dying for the sins of their childhood … Who is the faceless killer who’s come back to haunt them? CAN YOU EVER HIDE FROM JUSTICE?” – See more on the Head of Zeus website

This site uses Akismet to reduce spam. Learn how your comment data is processed.