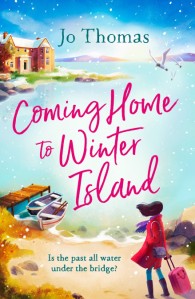 Do you need to find out where you’ve come from before you can know what the future holds?

Ruby’s singing career is on the verge of hitting the big time, when her voice breaks. Fearing her career is over, she signs up for a retreat in Tenerife to recover.

But an unexpected call from a stranger on a remote Scottish island takes her on a short trip to sort out some family business. It’s time to go and see the grandfather she’s never met.

City girl Ruby knows she will be happy to leave the windswept beaches behind as quickly as she can, especially as a years-old family rift means she knows she won’t be welcome at Teach Mhor.

But as she arrives at the big house overlooking the bay, she finds things are not as straightforward as she might have thought.

Ruby is about to have her big break. A talent scout is sat in the audience and she’s set to sing the best she’s ever sang. Until she opens her mouth and no sound comes out. Her voice is gone. Ruby books a vocal retreat in Tenerife, desperate to recover her voice before she misses her big chance forever. Before she goes however, she receives a call from her grandfather’s solicitor. The grandfather she has never met. Compelled to visit the remote Scottish island he calls home, Ruby hopes it will just be a short trip to sort out some business and then she can be on her way to Tenerife. But when she arrives she finds something, or rather someone, who is in the way. And it looks like Ruby will have to put her plans on hold to help move him along.

There was something warm and inviting about this novel. Even the windswept island and drafty big house felt like somewhere I would love to visit. I could easily imagine walking around the island, having travelled to it in a wind-battered boat.

Ruby is a conflicting character. Driven by her desire to succeed in her singing career, she is single-minded. Independent as a result of her father dying when she was young and being raised by her mother who’s first priority wasn’t Ruby, she has never really had to put anyone else first. Yet she soon comes to be fond of the grandfather she never knew, when she eventually meets Hector. Whilst her first aim was to remove Lachlan, the sitting tenant.  from the house, in order to sell it and move Hector to a care home, she finds herself slowly falling in love with the island, and the house and one of the inhabitants. Lachlan at first seems to closed off. It’s unclear why he’s not being open with Ruby as to what his promise to Hector is. When it emerges he aims to make the gin that Hector made many years before  it is something so benign it’s unclear why it had to be a secret. Though once in the open, Ruby does her best to help find the special ingredients, firstly to quicken Lachlan’s removal from the house and then because she truly cares to see Hector happy.

The book looks at the awful effects dementia can have on those inflicted with it, and those who love and care for the sufferers. It is dealt with in a respectful and gentle manner. Hector’s more lucid moments contrast with the more consistent status of living in a long ago past. His condition allows Ruby to get to know Hector as he is now and as he might once have been.

This is the perfect book to curl up with when the nights are drawing in and the temperature is dropping. There is something inviting about Jo Thomas’ writing, allowing the reader to sink into the story and get wrapped up in an island world. I thoroughly enjoyed every minute spent reading Coming Home to Winter Island.

A lovely, cosy read, no matter the time of year it is read. I look forward to reading more from Jo Thomas soon.

This site uses Akismet to reduce spam. Learn how your comment data is processed.